In this Anime drawing tutorial you will learn how to draw different styles of anime and manga eyes. Eyes are one of the key feature of the face drawing. Depending on the face expressions or mood eyes can be drawn in various styles which will reflect the mood of the anime.

You can learn more about different facial expressions for anime and manga in details on our website.

How to Draw Anime and Manga Eye

The basic eye can be draw by drawing the inner part and then the corners with some highlights on it. At the end the the eyelids and the eyelashes can be combined to form the outer eye shape.

You can learn more about how to draw blue anime eye, we have a full step by step guide to draw anime eyes.

If you see most of the anime characters has a very cute anime eyes with some sparkly colours. Sometimes the eyes are very big or maybe very small in size depending on the character. Mostly if we divide the style of eyes for the anime or manga, we can divide it into three different categories which are: normal , Realistic and chibi anime eye.

Now when it comes to drawing simple or normal Anime eyes some of the points should be kept in mind while drawing it.

Mostly the characters has a very cute anime eyes or sometimes a big eyes. To draw the normal eyes you just need to give a proper shape and Draw the cornea in the middle with some white spot on the top to show the reflection.

Above image shows some different anime eye reference which can be very useful for drawing your character eyes. The female characters mostly have big eyes as compare to the male characters.

But when it’s come to the eye drawing, you can see a huge difference in the drawing. The chubby character mostly have a very big and round eyes with some beautiful eyelashes.

This kind of round and big eyes gives a very cute look to the anime character and sometime we say it’s like kawaii face.

The one thing which differentiate the normal eyes from the realistic eyes is the shading and the reflection on the anime eye. 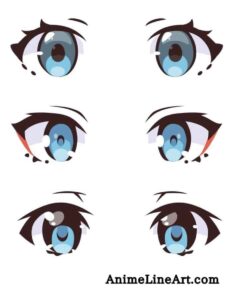 The above reference image of realistic anime eye shows the difference reflections and shadings which can be draw on the eye.

The colour of the eye is very important, the above image shows the blue eye but you can also choose purple anime eye as it looks great on the character.

The above ultimate guide of drawing anime eye can help you to draw and choose different anime eye styles.

The information can also help you to decide the style of your character and you can combine all the info and ref to create your own characters.

The last thing should be kept in mind that the eyes are also dependent on the style of character, like if the character is cute then the eyes should also be little cute and big in size.