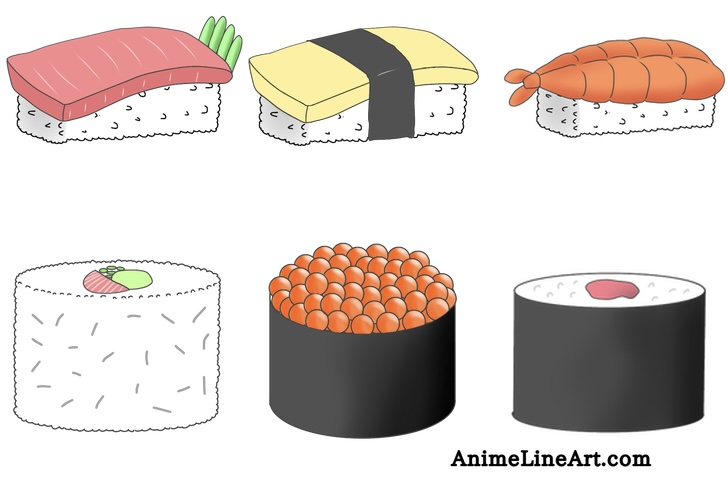 In this tutorial you will learn about how to draw sushi with simple step by step illustration. This article is loaded with the easy sushi drawing tricks and reference images.

Food plays a very important role in the anime and manga series. You may have seen very tempting food in the comics and animation and it gives a life to the animation.

One of the most popular dish of Japanese is called sushi. Which is prepared with vinegared rice and wrapped in nori. The most famous sushi is nigiri Maguro sushi, so we will draw it first.

How to Draw Sushi Rice Cake

First, we will see how to draw the sushi rice cake because it’s the main base for the sushi and it’s going to be use in our further drawings. 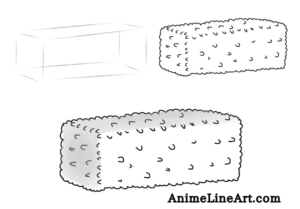 The rice cake is the base for the sushi which is usually in the shape of cuboid.

Starts with the outer shape and first draw a rough sketch using your light hands. After that draw a cuboid shape in the starting.

Step 2 – Drawing the Sides of the Rice Cake

Now the outer shape has been drawn so make a wavy line along the lines drawn earlier to give a rice look. Also add some in between curve lines to show rice in the drawing.

As the rice cake is drawn add some shadows with darker colour to give a nice look.

How to Draw Nigiri Sushi in Simple Steps

It’s a type of sushi in which the rice is moulded using hands and given a shape. On the top of this rice base the toppings are added, such as fish.

Step 1 – Drawing the Rice Base for the Nigiri Sushi

This step is similar to one which I have already discussed in “How to draw the rice base” topic. Follow the above steps and draw the base first. 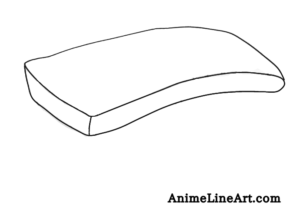 Now the base is created so we can draw the toppings. To draw the fish style topping, first draw a rectangular shape as show in the above image. 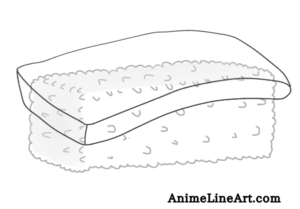 Place the topping as shown in the above image so that it covers the rice base. Also add the wavy lines using same technique which was given in the first topic. 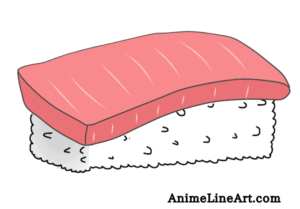 The rice is best suited in white colour. To give it more realistic look you can add some shadows to it.

The toppings are mainly made of fish so we can add some red colour to it with some white lines to give it a realistic look.

How to Draw Tamago Sushi in Simple Steps

This kind of sushi is similar to the previous one and the only difference is that it is added with rolled omelette topping. The base of the Sushi remains the same and the toppings is made up of a very soft fluffy omelette.

Step 1 – Drawing the Base of the Tamago Sushi

The first step to draw tamago sushi is similar to the previous one. Firstly, draw the base as mentioned in the starting paragraph.

Step 2 – Drawing the Tamago Piece on the Base 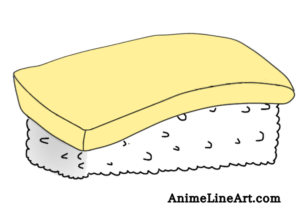 Once the base is drawn now draw a rectangular shape which will represent an omelette piece. Take the reference of the above image and draw the similar drawing.

Step 3 – Drawing Details on the Sushi

Now as the basic drawing is being completed now you can give some details to your drawing to give a realistic look. Draw some wavy lines on the base to show the rice grains and draw some shadows. 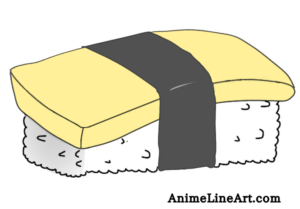 As the topping is made up of omelette, so we will colour the top part in yellow colour and the base remains the same as the previous one.

You can also draw some black strip wrapping the Sushi which represents the Nori.

How to Draw Ebi Nigiri Sushi in Simple Steps

Ebi nigiri sushi is made with the shrimp and sushi rice. The word “Ebi” refers to shrimp or the style of preparing shrimp in Japan. In which shrimps are placed flat on the rice.

Step 1 – Drawing the Base for the Shrimp 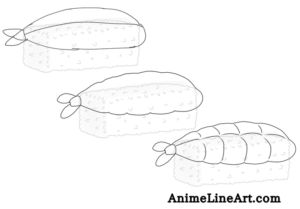 First draw a long fish like shape with tail to make an outline.

Once the base is created start give it a proper shape and some wavy line along the side. Also add some wavy line in the middle to shows the different parts. Take the reference from the above image to draw the shrimp. 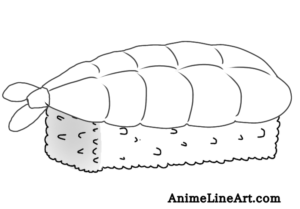 Now the outline of the sushi is complete, it’s time to do some details. First add some details to the base and then to the upper toppings. 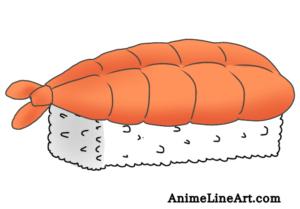 It’s time to add some colour to the drawing. Starts with the red colour and add some dark shadows as shown in the image above.

How to Draw Uramaki Sushi in Simple Steps

In Uramaki sushi the seaweeds are used inside the roll. Seaweeds are combined with the rice to make a sushi roll. 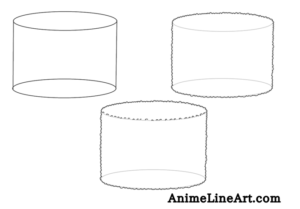 First draw the cylindrical shape as shown in the above illustration. To draw the roll, first make an oval shape one above the other. Then join the oval shape with vertical lines. After this erase the extra line in the roll to give a clean look.

Step 2 – Drawing the Rice on the Rolls 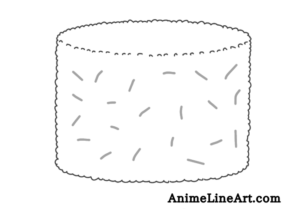 You can also add some short lines on the surface of the roll to show rice pieces. Also draw some veggies and fish inside the roll as shown in the image. 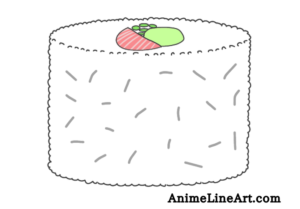 The roll is coloured with white and with some dark shadows. The veggies are coloured with green and red colour as shown in the above illustration.

How to Draw Ikura Nigiri Sushi in Simple Steps

The Ikura Nigiri got his name from the roe, which are the fish eggs of salmon fish. They are very expensive in price and you may have heard the word caviar which are referred to eggs. 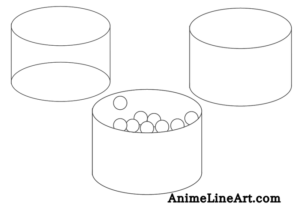 Start with the spherical space and draw two oval shapes one over the other and then join it with the vertical lines as done in the previous drawing.

Step 2 – Drawing the Roe on the Sushi 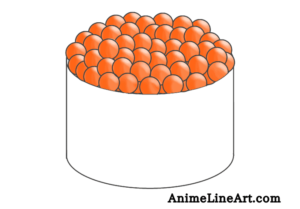 After that erase the extra lines from the drawing and start drawing small circle on the top of the roll. Continue this process and fill all the roll with it. 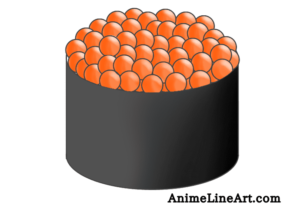 Once the small circles are drawn, it’s time to add some colour to the sushi. The roe on sushi is with some orange colour and you can add some white shadows on the top to give a perfect look.

The side of sushi or you can say the side surface is made from Nuri so we can colour it some dark colour.

How to Draw Maki Sushi in Simple Steps

The maki sushi rolls are same as the normal sushi containing rice and some fillings. But the maki sushi can be stuffed with different fillings to give a different taste.

First start with the drawing roll as done in the previous step and you can also take the help of the above image.

Step 2 – Draw the Toppings for the Sushi 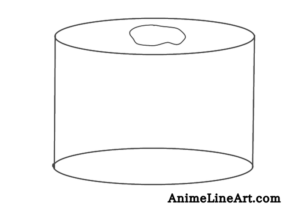 Now once the topping is created you can draw small piece on the top to indicate some fillings. 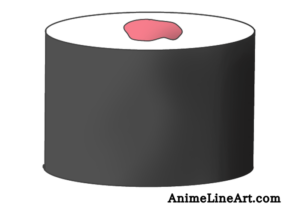 As always, the inner section is filled with rice so it remains white in colour. You can add different colour according to the fillings which you have drawn in the sushi.

At last, the sides roll should be coloured in dark.