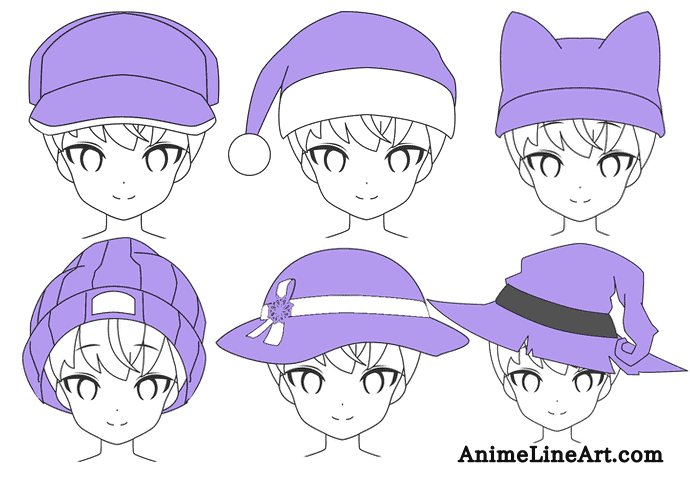 In this drawing tutorial you will learn how to draw different styles of anime hats. Drawing an anime hat can be a lot of fun. There are many different styles to choose from, and it’s a great way to show off your artistic skills.

Anime hats are normally a part of anime and manga. In anime, the hat’s type is often reflected in the character, as well as their personality and background.

There are certain points which is to be remembered while drawing the anime hat. Basically you have to focus on two things:

You will notice I have differentiated the drawing into three colours which will help you to differentiate the position of the head, hair and the hat while drawing.

How to Draw Hairs With the Hat

If I talk about the hairs you will see that I have highlighted the hairs with the blue colour so that you can easily see the position of the hairs.

Whatever styles of hair you are drawing it should be not fluffy it should be straight below the hat so that it should look little compressed with the cap which you are going to draw.

How to Draw Santa Clues Hat

It is a mystery how Santa Claus manages to deliver all those gifts on Christmas Eve. But if you want to draw his hat, all you need is a pencil and paper. Step 1: Drawing Santa’s hat starts with the brim of the hat. Draw a semi-circle shape on your paper and then add the lines on the sides to create the brim.

Step 2: Next, draw two lines that start at either end of the brim and go up and then come back down to meet in an upside-down V shape in the centre of your paper.

Step 3: Finally, draw two curved lines that connect these two ends together at their peaks.

How to Draw Witch Hat

Another type of hat that is popular is a witch’s hat. This type of hat usually has a pointy top and three points on either side for hanging things like brooms. To draw this hat, start with a circle with a line across it. Then, draw a triangle that goes from the top of one point of the circle to another point. From there, add two more lines so that it looks like a witch’s hat.

How to Draw Basket Ball Cap

Drawing a basket ball cap is not as difficult as it may seem. All you need to do is take the time to learn the basic drawing skills. 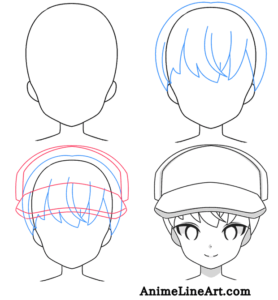 Step 1: The first step in drawing a basket ball cap is to sketch out the shape of the hat on paper. Next, draw the brim by making an arc that goes from one side of your paper to the other.

Step 2: After that, draw two lines going down from each end of your brim and then connect them together at their peak.

Step 3: The final step is filling in all of the blank spaces with thin lines or shading until you are satisfied with your work and you have a good looking basket ball cap drawing ready.

The beanie hat are known by many names. This caps are made with cloths and that wraps the head complete. They are mostly used for keeping the head worms in the winters. Step 2: Then draw another circle above it to complete the base drawing of the hat. Then draw an arc shape on the hat and add some beam lines in between the cap.

How to Draw Floppy Hat

This is also one of the popular female hat. This kind of hat can be drawn in few simple steps.

Step 1: First draw a semi circle shape on the head of the female anime character and then on the bottom draw a wavy line as shown on the image above.

Step 2: At last join the lines and erase the extra lines. To make the hat draw more beautiful you can draw a ribbon and a bow on the hat.

There are many different anime hats that you can draw. One of the most popular is the cat ear hat. 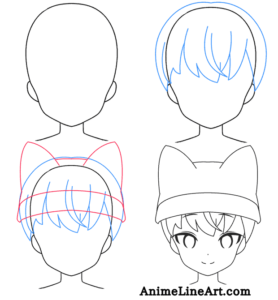 Step 1: To draw this hat, start by drawing two semicircular arcs on either side of the head.

Step 2: These arcs should connect with a line in the back of the head. Add two more semicircles for ears, and then add whiskers for extra detail.

How to Draw Mortar Hat or Graduation Cap 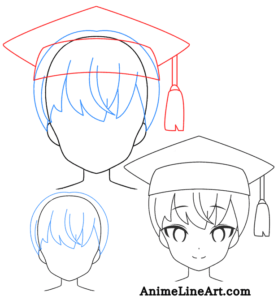 Step 1: This kind of hat can be drawn easily by just joining simple lines together. Start with drawing or two parallel lines only for head of the anime character.

Step 2: Then draw a rectangular shape on the above of the head as shown in the above image. Then erase the extra lines from your drawing and draw the tassels on the one side.